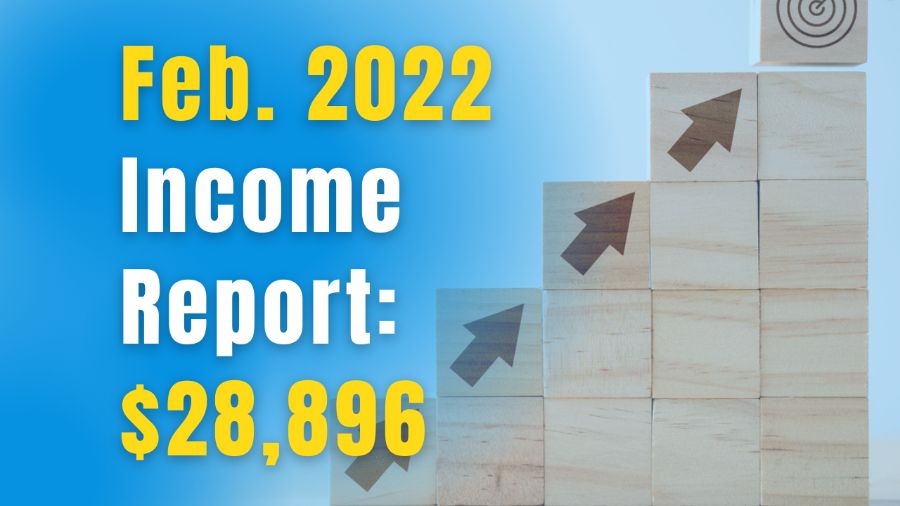 As I mentioned last month, we expected January to come with a big drop and February to follow with a slight increase, even with three less days in the month. As it turns out, that’s exactly what happened.

Looking at the year-over-year numbers for February, our revenue increased by 46%, which is great to see. Based on the trends over the last couple of years, we expect to see a big jump this year going into March as well.

Changes and Updates in February

February was another relatively quiet month as far as changes. However, we did roll out a digital product on site #2, which is a seasonal site that should start taking off over the next few months.

Along with the launch of the digital product, we also revamped the homepage on that site, which is something we’ve never tested in the past. We created a static homepage that puts focus on navigating around our site, as well as spotlighting the digital product mentioned above.

For informational sites, a blog roll is typically sufficient as your homepage (most people land on a specific article, get what they need, then bounce), but what we’ve noticed is that as the traffic grows on our sites, so does the percentage of visitors heading over to the homepage.

In the past, the homepage on our sites was rarely visited, but on our two oldest sites, it’s one of the highest traffic pages on each site. Considering that’s it’s also the lowest RPM page on each site, we figured it made sense to create a static homepage that drives traffic to our top posts and the digital product that we launched.

February was a bit slower as far as the amount of content that we published, coming in at around 125 posts across all of our sites. We outsourced about the same amount of content as usual, but it didn’t all come back as quickly as usual (partly due to having a few less days in February).

Aside from our case study site (site #6), we schedule posts out about a month in advance, so our posting frequency doesn’t really change month to month, even if the outsourced articles are slow to come back.

For site #6, we are publishing immediately in batches of roughly 7-10 posts/week. Site #5 is currently at 1 post/day, while the four oldest sites are at 4 posts/week.

Our traffic was down overall in February, which wasn’t too surprising considering there were three less days in the month and we haven’t quite hit the warm season yet. We expect to see a big jump on sites 2-4 over the next few months, as those sites have a lot of seasonal content that do well in the warmer months.

One surprise in February was a decent drop in traffic for site #3, but we haven’t put much time into researching it yet. The growth on site #5 stunted a bit as well, but it’s at least going in the right direction.

As I mentioned up above, we made a total of $28,895.92 in February, which was about a 46% increase from February of 2021. If you’re curious why our year-over-year revenue increased by more than our traffic, see the “Revenue” section in the January income report.

The average session RPMs (for display ads) across our four sites ranged from $26-35, which was up from the $23 – 27 RPMs that we saw in January.

In 2021, we saw a 35% increase in revenue from February to March. We’re hoping to see a similar increase this year as our seasonal sites start to ramp up for the summer.

Site #5 is only a few thousand sessions per month away from Mediavine’s monthly threshold, so that should give our overall portfolio another boost in the near future as well.

Here is a breakdown of our ad revenue from Mediavine in February. NOTE: the “Launch Date” represents the date that each site was launched with Mediavine ads, not the date it was created:

As you can see above, site #1 still pulled the majority of the revenue in February, but you might also notice that site #2 jumped up quite a bit. Both site #2 and mybackyardlife.com should see significant jumps over the next few months. Site #3 also has quite a bit of seasonal content and should benefit as well.

After display ad revenue, our next largest revenue source is from Amazon Associates. In February, we made $921.80 from our US account, and a small amount of revenue from the UK and Canada ($60.97).

Our expenses for February were similar to the past several months, coming in at a total of $9,021.07. As usual, the bulk of our expenses can be attributed to outsourced content.

Here’s a breakdown of our expenses for February:

Our goals for March mirror our goals for the whole year, which you can review in the January income report. In a nutshell, we’re putting our focus on strengthening our existing sites by adding more content around existing topics and adding lots of relevant internal links to improve our topical authority.

While the increase from January to February wasn’t significant, it’s always nice to see your month-to-month revenue climb. With January and February expected to be our lowest months of the year by far, we’re excited to see them in the rearview mirror.