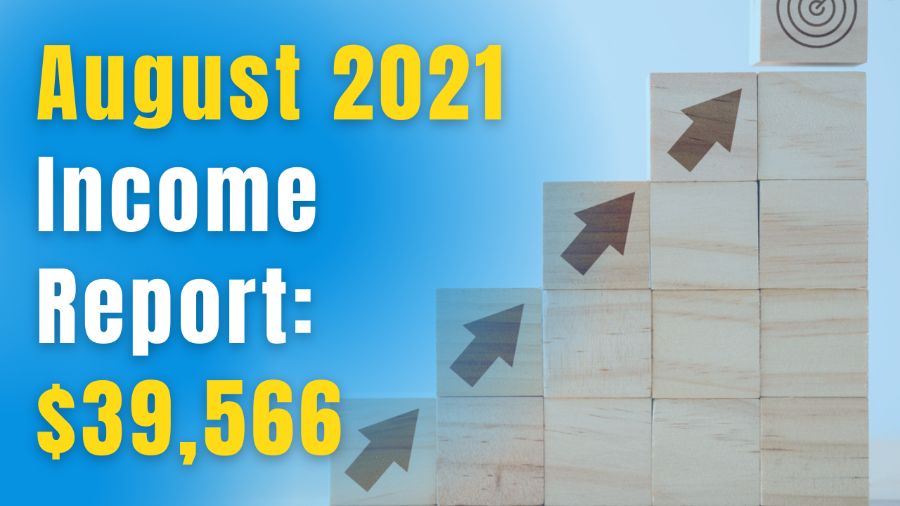 August didn’t go quite as well as we’d hoped, but we really can’t complain. In the July income report, I mentioned that we would be happy if we stayed flat for the next couple of months, and that’s basically what happened in August.

The relatively small drop appears to mostly be due to a seasonal decline in traffic across two of our sites, one of which we recently revealed on our YouTube channel.

Part of the drop also seems to be tied to the recent Google core algorithm updates in June and July, which affected mybackyardlife.com, which is the site that we revealed. Luckily, only one of our sites was affected, and the impact wasn’t too severe.

We’re not exactly sure why My Backyard Life was hit by the updates, but our only thought at this point in time is that it had considerably more affiliate links on it than our other sites. Most of those links were for low cost items, like spices and rubs, so we will be removing quite a few of them to see if it makes a difference over time.

Now before I jump into the numbers, let me quickly go over my usual disclaimers. First, I’m not a one-man show. I work as part of a small, four-person team. For those of you who follow our YouTube channel, you’ve recently met one of those people.

Also, all of the revenue and traffic figures below exclude anything tied to passiveincomeunlocked.com and the Passive Income Unlocked YouTube channel. I want to keep those separate, as I don’t want those totals to artificially inflate what we’ve built with our niche sites from the ground up.

Changes and Updates in August

August ended up being a pretty big month for us as far as making changes, which is pretty unusual, as we tend to stick to the same routine and system month to month.

First, I mentioned in last month’s income report that we decided to switch to a new hosting company named Rocket. That change ended up being a good one.

Not only did we reduce our monthly hosting cost from around $1,000 to $100, but all of our sites are now passing all of the Google core web vital metrics. This isn’t something we were too concerned about to begin with, but we’d obviously rather be in the green than in the red or yellow.

Next, we decided to test a keyword research tool called Keyword Chef that I’ve seen pop up a lot recently on YouTube. We ended up purchasing their most expensive package and burned through all of it over a couple of days, testing the tool with several different approaches.

At the end of the day, I was really impressed with Keyword Chef, as it allows you to filter your results to see question-based keywords, which is what we target the most, and it spit out quite a few results that we’d somehow missed with our manual method.

I don’t see us using this as our primary keyword research method going forward, but I do see us potentially using it to take a second sweep on any topics we’ve already researched, to see if we’ve missed any good opportunities.

If that wasn’t enough, we’ve also decided to move on to a different writing service. For the past several months, we’ve been using Upwork and Textun for outsourced content. While we aren’t about to completely abandon either of these options, we’ve recently seen the quality decline with Textun and decided to test the waters.

After doing quite a bit of research, we decided to test a writing service called Passion Posts. Passion Posts works a bit differently from other writing services, as they create their posts to match the Income School style of response, staple, and pillar posts.

In addition, they hire their own writers that are “passionate” across various hobby niches, with the goal being to match a knowledgeable writer with your niche site. For example, if you need camping articles, they’ll assign your posts to someone with a camping background.

While this sounds great on the surface, the real test comes from seeing the actual content that the writers produce, and I have to say, I’ve been extremely impressed so far.

We hired out a batch of test posts across all of our sites, and the articles that we received in return were easily some of the highest-quality posts that we’ve ever received from a writing service.

Our plan is to scale up to spend a few thousand dollars with Passion Posts in September, then we may or may not increase further from there.

By the way, if you want to test Passion Posts for yourself, you can get 10% off your first order by using discount code LAKPFDZ2J0.

With all of that out of the way, let’s jump into the numbers.

As I’ve mentioned in the past, we currently have five sites, four of which are monetized. The fifth site is less than a year old and is starting to really hit that growth curve that we’d expect to see around this stage in its development.

Our posting schedule is currently four posts/site/week across all five sites. We’re throwing around the idea of scaling this back for the first four sites when we hit the new year, but that’s yet to be determined.

We’ve ramped up our keyword research efforts as of August, so if we can come up with enough good targets for the older sites, we may stick to the same posting schedule for longer than anticipated.

Whatever we do, we want to make sure we have enough keywords to last us for several years on each site. At this point in time, we have no intention of selling any of our sites anytime soon, so having enough keywords to publish content on a regular basis is important for each site’s longevity.

We’re also likely going to add a sixth site to our portfolio by the end of the year. We’ve already started researching keywords for that site, so it’s just a matter of time before we move forward with it.

We’re throwing around the idea of front-loading that site with content as an experiment, but we haven’t given it too much thought quite yet.

Here is a breakdown of the numbers for our existing sites (including scheduled posts and outsourced posts that haven’t been received yet):

Our traffic in August took a slight hit, mostly due to seasonal declines on site #2 and My Backyard Life. Fortunately, the other three sites all increased in traffic.

Here’s a breakdown of the total pageviews for August:

August was another strong month for site #5, with almost 40% month-over-month growth. We’re excited to get this site monetized with Mediavine, and that day appears to be approaching quickly.

While we would prefer to see month-to-month growth, we’re pretty happy with consistent revenue around the $40k mark for the past few months.

We anticipate a similar trend over the next month or two, but hope to see the revenue climb in November and December as the ad RPMs rise sharply for the holiday season.

With that being said, three of our sites have some seasonal content (two are very seasonal), so we’ll have to wait to see whether the increase in RPMs more than offsets the decline in traffic.

Here is a breakdown of our ad revenue from Mediavine in August. NOTE: the “Launch Date” represents the date that each site was launched with Mediavine ads, not the day it was created:

After display ad revenue, our next largest revenue source is from Amazon Associates. In August, we made $1,376.80 from our US account, and a small amount of revenue from the UK and Canada ($86.09).

Aside from the income from Mediavine ads and Amazon Associates, we also made a small amount of income from the following sources:

As I mentioned up above, we spent a bit of money trying out a few things in August. However, we also saved quite a bit of money on hosting, so our overall expenses remained about the same as the past few months.

Here’s a quick breakdown of our expenses for August:

However, we still haven’t put together a plan for using these email addresses. For now, we’re just collecting them and sending out an automated recap of our posts from the previous week using MailPoet.

While we were collecting email addresses for three of our sites, we’ve decided to put My Backyard Life on hold, as the content is so broad that the emails simply aren’t targeted enough.

As I mentioned earlier, we will be moving quite a bit of our outsourced content over to Passion Posts, possibly all of it down the road. While the cost is a bit higher than we’re used to paying, when your business is literally built around content, it only makes sense to publish high quality content when you can afford to do so.

Our main focus for the rest of the year will be to build our keyword lists for both our current sites and site #6, which we’ll hopefully launch by the end of the year. Depending on how many keywords we can come up with, we may or may not adjust the posting frequency on some or all of our current sites.

While August didn’t go quite as well as we had hoped, we weren’t too far off from our goals. If we can stay close to that $40,000 mark each of the next two months, then go up for the last couple of months of 2021, we’ll consider it an extremely successful year.

With site #5 getting close to Mediavine’s threshold and a new site waiting to be launched, we’re excited for what 2022 will bring.