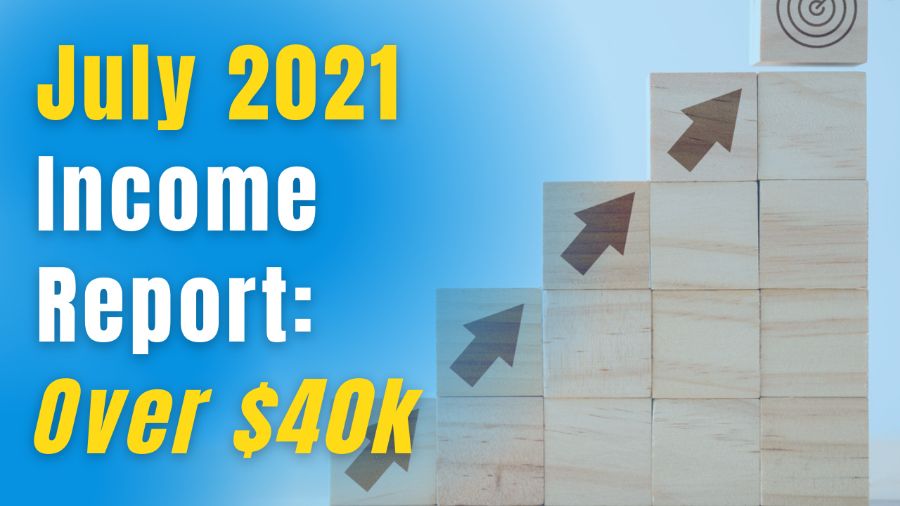 In last month’s income report, I mentioned that I expected our revenue to be down this month due to the bulk of our revenue coming from display ads and RPMs naturally dropping during the first month of a quarter.

Our traffic for July was a bit higher (details further down below), but again, not by a significant amount. In other words, the ad RPMs didn’t drop like expected. In fact, one of our sites saw an increase in ad RPMs in July, while another remained steady.

With the pandemic impacting the world over the past 18 months, RPMs have been all over the place and difficult to predict. My hunch is that this phenomenon is still in play with the RPMs to this day.

Whatever the case, we’re obviously very happy to see our numbers hold steady in a month where we were expecting to see a drop. We’ll be happy if we see the same next month, as the traffic will likely start declining on two of our sites that have quite a bit of outdoor content.

Now before I jump into the numbers, let me quickly go over my usual disclaimers. One, I don’t do this solo. Instead, I’ve built a small team of three others around me, and together, we divide and conquer. I think this approach is a big key to our success with building niche sites.

Two, all of the revenue and traffic figures below exclude anything tied to passiveincomeunlocked.com and the Passive Income Unlocked YouTube channel. I want to keep those separate, as I don’t want those totals to artificially inflate what we’ve built with our niche sites from the ground up.

Before we get into the figures, I want to briefly go over one change we decided to make last month, which was a hosting change.

For all of our sites up to this point, we’ve always started with Bluehost, then moved them to a better host after they’ve reached a certain point (20,000 – 30,000) pageviews per month.

We’ve tried several hosts in the past, including Bluehost, Host Gator, WPX, and Kinsta, with Kinsta being the most recent one we were using. We were really happy with Kinsta, but the cost can be pretty substantial when you run high-traffic sites.

After seeing a recommendation from Jon Dykstra from Fat Stacks Blog in his mailing list, I decided to look into Rocket.net. After doing some research and peppering their sales team with questions, we decided to make the switch.

Rocket.net is considerably cheaper than Kinsta, with no noticeable loss in page speed. The big kicker is that they include Cloudflare Enterprise with all of their plans.

With Cloudflare Enterprise, not only will your site load quickly from all around the world, but you’ll get the security features that come included as well. As an example, since switching to Rocket, our spam comments have cut down from about 30-50/site/week to about 2-3/site/week.

As far as page speed, our sites are still getting as good, or better, scores with the Google PageSpeed Insights tool. What really matters though is how fast the sites load for actual users, and when we’ve tested our sites ourselves, the pages open almost instantly.

We need to give it some time before I can fully recommend switching to Rocket, but as of right now, we’re very happy with both the cost and performance that we’re seeing.

As of right now, we still have five sites. We do have ideas for 2-3 more, but we’re going to hold off on starting another site until we feel that site #5 has succeeded.

Speaking of site #5, we’re starting to see some nice traction on it. It is now at the 10k pageviews per month level and has gone up roughly 30% and 25% in each of the last two months.

As a reminder, site #5 is only 10 months old, and we took a different approach with it than with our other sites. Instead of targeting a subniche within a niche early on, we decided to write about anything and everything within a very broad niche, right from day 1.

On top of that, we have outsourced 100% of the content, which is not something I typically recommend. On our first four sites, we wrote the first 50-100 articles ourselves.

Nonetheless, we’re starting to see some good growth on the site and fully expect it to succeed.

As far as our four income-generating sites, we stuck to our recent plan of posting roughly 4 posts/week/site in July.

Here is a breakdown of the numbers:

Like last month, the vast majority of the posts in July were outsourced. We do still write some of the posts ourselves, depending on the topic or type of post, but for the most part, we like to focus our efforts in other areas instead.

As I mentioned up above, our traffic was up slightly in July when compared to June. When we look at our four main sites individually, one dropped a decent amount, one stayed stead, and the other two jumped up quite a bit.

In the end, we’ve basically flatlined from May to July, but due to the seasonality on a couple of our sites, this is what we expected. We saw the same thing last year as well.

Here’s a breakdown of the total pageviews for July:

If you look really closely, you can actually start to see a blue line at the bottom of the bar for July. That blue line represents site#5, which like I said, is right at the 10k pageviews/month mark now.

As I mentioned in the intro, we made a total of $40,546.70 in July. This was our second highest month ever, with June being the highest.

Here’s a breakdown of the totals by month:

As you can see, the vast majority of our revenue comes from display ads, with a small sliver of revenue coming from Amazon Associates.

For ads, we go through Mediavine. Not only are their RPMs excellent, but they’re always pushing the envelope and staying ahead of the curve when it comes to providing new tech to help you maximize your earnings.

Here is a breakdown of our ad revenue from Mediavine in July (the “Launch Date” represents the date that each site was launched with Mediavine ads, not the day it was created):

After display ad revenue, our next largest revenue source is from Amazon Associates. In July, we made $1,225.58 from our US account, and a small amount of revenue from the UK and Canada ($66.73).

As I’ve mentioned in the past, we don’t add many affiliate links to our content, but the ones that we do add perform well. In July, our conversion rate on Amazon Associates was over 18%.

Aside from the income from Mediavine ads and Amazon Associates, we also made a small amount of income from the following sources:

Revenue means nothing without expenses, so next, let’s take a look at what it cost us last month to generate over $40,000 in revenue.

Here’s a quick breakdown of our expenses for July:

However, we still have not put together a plan for using these email addresses. For now, we’re just collecting them and sending out an automated recap of our posts from the previous week using MailPoet.

Our plans are still the same as last month, which is to continue posting 4 posts/site/week, continue collecting email addresses, and grow a YouTube channel on at least one of our sites.

In addition, we’ll continue to work on optimizing our old content by adding images and links, where appropriate.

Lastly, as I mentioned above, we do have some ideas for 2-3 new sites, but we’re going to hold off on those until site #5 is monetized.

July surpassed our expectations, and we couldn’t be happier about it. While we tend to aim too high and are okay with coming up a bit short, in this case, we expected a drop and didn’t really see one.

We don’t expect to see much of a change in traffic or revenue from July to August, and if that’s what ends up happening, we’ll feel good about it. One of the best things you can ask for with a niche site is a consistent return.

Whatever the case, as you can see, it’s absolutely possible to make a good amount of money with simple niche sites. I hope these reports help to motivate and inspire you to build and grow your own sites.

Let me know how your niche site journey is going in the comments below.